The North Carolina Commission on the Administration of Law and Justice, convened by former Chief Justice Mark Martin, was an independent, multidisciplinary commission that undertook a comprehensive evaluation of our judicial system and made recommendations for strengthening our courts within the existing administrative framework. Chief Justice Martin described the need for this Commission in his 2015 State of the Judiciary Address, and announced the Commission co-chairs in May 2015. The Commission’s diverse membership was divided into five committees corresponding to five areas of inquiry: (1) Civil Justice; (2) Criminal Investigation and Adjudication; (3) Legal Professionalism; (4) Public Trust and Confidence; and (5) Technology.

Chief Justice Martin invited participation from the General Assembly. The Commission’s work provides a basis for discussion with the General Assembly to help ensure North Carolina’s Judicial Branch meets the needs of our citizens and their expectations for a modern court system. The Commission finalized its findings and recommendations in a series of reports that were presented to the Chief Justice and made available to the public in early 2017. See the Final Report for more information.

The NCCALJ’s Final Report is the culmination of 15 months of focused inquiry, informed dialogue, robust discussion, and extensive collaboration. It is essential that any court system be trusted by, and have the confidence of, the public that it serves. The NCCALJ’s recommendations reflect the understanding that public trust and confidence in our court system is at its highest when the courts are seen as fair, accessible, and effectively managed. 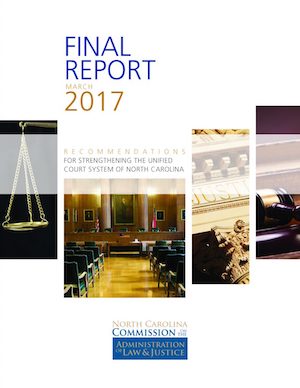