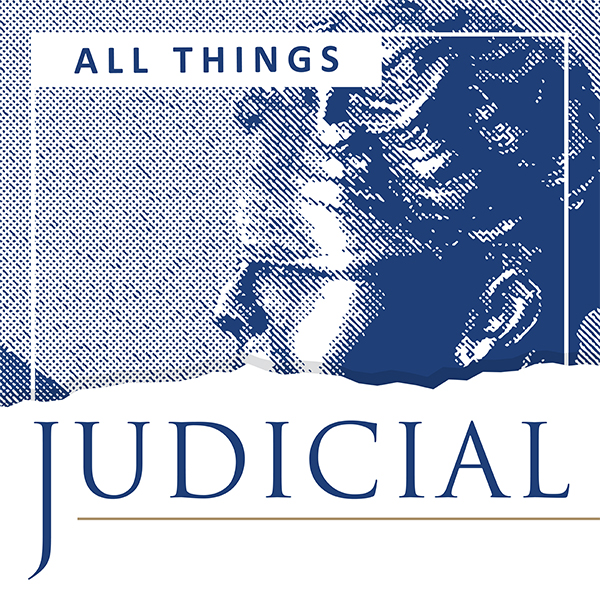 All Things Judicial is a podcast about the important role of the North Carolina Judicial Branch in state government. The podcast follows a bi-monthly release schedule with each new episode available for download every other Wednesday beginning February 10, 2021.

On this podcast you’ll hear interviews from recognizable figures in our judicial communities and learn about topics you may not have realized were related to what we do every day – human trafficking prevention, civics education, and the increased modernization of our courts. We think we’ve found a podcast format that really works with rotating guest hosts that will keep each episode fresh and interesting to our listeners.

All Things Judicial is available on all podcast platforms or below on NCcourts.gov.

Episode 6 – In this episode, Chief Justice’s Commission on Professionalism Executive Director Mel Wright discusses and shares excerpts from a 2017 interview with former North Carolina Court of Appeals Chief Judge Gerald Arnold. Judge Arnold shares his experience arguing before the original members of the Court of Appeals, joining that Court as a judge then later as chief judge. Judge Arnold was instrumental in a restoration project in the 1990s that restored and preserved the historical value of the Court of Appeals' courtroom ceiling. In addition to providing insight into the Court's history, Judge Arnold gives time-tested professionalism advice for lawyers.

“There is nothing more important than the concept of professionalism,” Judge Arnold said. “Treat another lawyer the way you want that lawyer to treat you. It's the golden rule and your momma taught you that.”

Bonus Episode – In this bonus episode released on the 245th anniversary of the Halifax Resolves, we take listeners on a trip to the Historic District in Halifax, North Carolina, to speak with Frank McMahon, a historic interpreter with the North Carolina Department of Natural and Cultural Resources. Frank shares what life was like in 18th/19th century Halifax, North Carolina. Then, Chief Justice Paul Newby joins us in studio for a discussion about the Halifax Resolves and the events leading up to its adoption on April 12, 1776.

Guests (in order of appearance):

Episode 5 – This episode features the North Carolina Guardian ad Litem (GAL) program which equips community volunteers to serve abused and neglected children by advocating for their best interests in court. This episode's guests are GAL volunteers who share why they decided to volunteer, their experiences in the program, and the joys and challenges of representing children in the court system.

“When I came there I was the only woman on the Court. Our numbers continued to grow and within a few years we had our first all woman panel, and a few years after that, we actually had a majority of women on the Court of Appeals,” former Chief Judge McGee said in the podcast. “It's been great to be able to have one another to be able to talk with, be able to share stories with, and be encouraged by.”

The Supreme Court investiture excerpts included in this podcast episode are from Chief Justice Newby, Associate Justice Phil Berger Jr., and Associate Justice Tamara Patterson Barringer. They were formally installed at the Supreme Court of North Carolina on January 6, 2021. The audio was taken from the virtual swearing-in ceremony that was streamed online for guests, the media, and the public.

The excerpts for the North Carolina Court of Appeals investiture ceremonies are from Judge Jeffery K. Carpenter, Judge April C. Wood, Judge Fred Gore, Judge Jefferson Griffin, and Judge Darren Jackson. They were formally installed at the North Carolina Court of Appeals on January 14, 2021, and as with the Supreme Court excerpts, the audio was taken from the virtual swearing-in ceremony streamed online.


Episode 3 – Chief Justice’s Commission on Professionalism Executive Director Mel Wright welcomes Kinston attorney James S. “Jimbo” Perry to All Things Judicial. They discuss Jimbo’s career as an attorney and the calculus that many lawyers make between prioritizing work over people and relationships in their lives. Jimbo shared his personal experiences and desires to bring about change in his community through acts of service.

“One of the struggles that we as attorneys have is we sometimes work so hard that we don’t take care of the things that are most important,” Jimbo Perry said during the podcast. “The way to have joy and happiness is not by having and getting but by giving and serving.”

Episode 2 – In this episode hosted by Supreme Court of North Carolina Associate Justice Michael Morgan and entitled “Black History Made Me Who I Am,” Justice Morgan welcomed retired Court of Appeals Judge Wanda Bryant and current Court of Appeals Judge Fred Gore. They discussed their journeys from “birth to bench,” mentors who influenced their lives, and advice they would like to share with the next generation of African Americans entering the legal profession. Justice Morgan and Judge Bryant shared their personal experiences of being the first African American children integrated into their local elementary schools. Judge Gore shared his deep commitment to using his judgeship as a positive influence on the youth in his community.

Trailer - In this trailer for the new podcast All Things Judicial, Chief Justice Paul Newby shares information about the podcast and his vision for the North Carolina Judicial Branch.

Do you have feedback or episode ideas? Please reach out to AllThingsJudicial@nccourts.org.